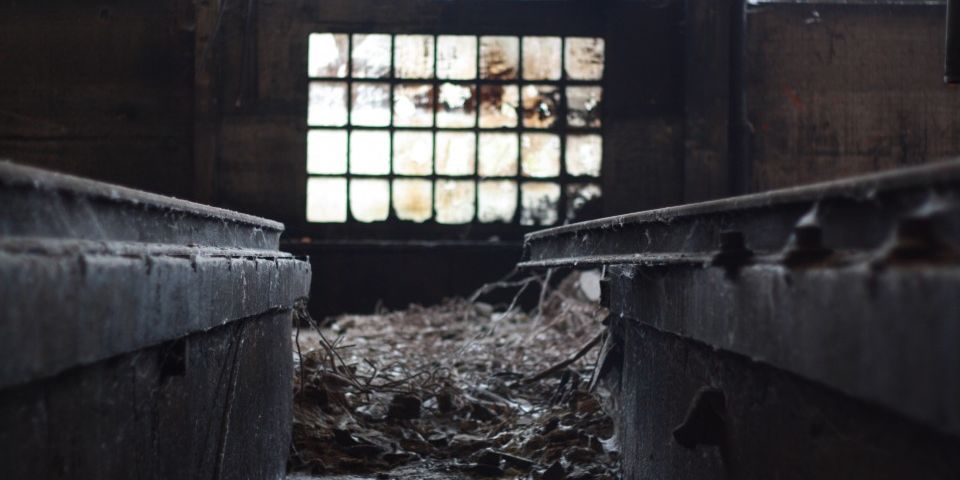 Glass crunched under Jace’s feet as he walked through the old warehouse. The building had been abandoned for over 30 years and in its current state of disrepair it could fall on him at any moment.

What was left of the roof did little to prevent Mother Nature’s assault on the old building. She was determined to grind this place into powder. Pools of scum-encrusted water, leaves, and other detritus were scattered about the derelict structure.

Small animals scurried amid the shadows hoping to avoid Jace and to look for their next meal. The rotting carcasses of some of these animals were evidence of larger predators that frequented this bountiful hunting ground.

It was mid-January and the dark, grey clouds Jace could see through the gaping holes in the ceiling threatened snow. In the distance he could here thunder which meant this was a particularly nasty storm descending upon him. He’d have to work quickly.

The old android factory sat in the middle of an ancient industrial zone that at one time house manufacturing complexes for companies like Ford, Chrysler, and Chevrolet. According to Jace’s wristcomp these companies manufactured a means of four-wheeled conveyance that used fossil fuels.

Fossil fuels hadn’t been used in over 300 years, not since the energy crisis led to all-out war between corporate-states. Corporate governments had controlled large swaths of land for years leading up to the war. Now, a single conglomerate controlled 90% of the planet’s resources—food, fuel, and finances.

This city had been destroyed and rebuilt several times. Detroit had burned to the ground in the late 21st century and was rebuilt and named New Detroit. A few hundred years later a mega-corporation had dropped a massive near-earth asteroid it had collected on the city, effectively vaporizing it.

When the city was rebuilt it was named Great Lake City. The name Detroit was taboo and only mentioned among citizens that had once lived in the “Motor City”. After the Great Corporate Wars, Great Lake City was abandoned because the water supply had been poisoned. It was now a “Free Zone”.

Free Zones were small patches of old corporate-owned properties that GlobalCom had let run wild. They were called Free Zones because they’re supposed to be free of human inhabitants. You couldn’t live a decent life in one of these Free Zones. People who wanted to avoid GlobalCom’s influence tried, but without any way to grow food it became nearly impossible.

Jace, however, had learned how to grow food. The only problem was the polluted water in the city. He’d been experimenting with water reclamation using hidden cisterns he’d installed throughout the city. He’d scavenged old components to build solar and wind power generators but their efficiency was poor, at best.

The biggest threat, however, didn’t come from a lack of food, power, or water. The drones that silently patrolled the city were his biggest problem. If he was spotted he’d be dead before he could even see which drone shot him. Fortunately, not many drones patrolled this Free Zone.

Jace was doubly fortunate because he was assigned the task of finding and repairing GlobalCom’s automated security drones. It usually gave him and excuse to enter the Free Zone but he wasn’t given carte blanche. He had to plan his trips perfectly.

That generally wasn’t a problem because Jace knew where a downed drone was located. He had brought it down. So far, GlobalCom’s AI had not figured out it was him sabotaging the drones but Jace figured it would detect a pattern soon enough and he’d be exterminated immediately.

Justice, if you wanted to call it that, was swift and unyielding under GlobalCom. An AI assessed your guilt or innocence and if you were found guilty you were exterminated on the spot. For every crime death was the punishment. There were no appeals because the AI was “99.999% correct in all instances of guilt assessment.”

Jace checked his chrono. He only had 11 more minutes to find the drone and repair it before the AI would get suspicious of his activities. It was just outside the western wall of the warehouse. He started to jog in its general direction and stopped by one cistern long enough to test the water.

It was clean! That meant he could start the next phase of his plan. He tapped out a quick message on his wristcomp and triple-encrypted it. He thought about using his new penta-encryption process but using too much encryption would raise suspicions. He hit the SEND icon and raised his hand above his head.

The resistance was using old GPS satellite technology that had been abandoned for the quantum communication techniques that were ubiquitous for the past 100 years. Old tech always seemed to fool the AIs because they didn’t think it was effective or efficient.

After 45 seconds his wristcomp chirped acknowledging that the message had been sent. Good, the structure of the building hadn’t blocked the signal. The satellites were in geosynchronous orbit around the planet and had miraculously maintained those orbits despite being abandoned over 200 years ago.

Jace continued toward the downed drone. He had 5 minutes left. Fortunately, androids weren’t allowed in Free Zones. GlobalCom didn’t want another “Droid Day” on their hands so they’d removed the ability for them to self-repair or repair other devices that had an AI.

The security drones had a rudimentary AI that connected back to GlobalCom’s primary AI, Maggie. Nobody knew why it was called Maggie but when it came online 125 years ago that’s what everyone called it.

Jace spotted the drone and signaled it with his repair baton. It acknowledged his presence and powered its security measures off. Jace found the access port and pulled the mono-filament connection out of his wristcomp and connected it to the drone. A few lines of corrected code and it was ready to fly again.

He initiated the reboot sequence and shimmed in three lines of code that would allow him to communicate with it and the other drones in the area later. All the drones shared code with each other so it was easy to crash the things when he needed to do a little exploring.

Once the drone was back online it floated up eight feet and proceeded to follow its base programming.

YOU ARE IN A FREE ZONE. PLEASE STATE YOUR NAME, DESIGNATION, AND AUTHORIZATION CODE.

AUTHORIZED. YOU HAVE 12 MINUTES TO EXIT THE FREE ZONE.

The drone flew off and resumed its previous patrol pattern. Jace’s communicator tickled his ear.

“Hello, Jace. This is Maggie. I see you’ve completed repairs on Drone X7LT34V9. Please proceed to the nearest exit and wait for transportation.”

Jace started to sweat. He’d brought a transport and left it outside the Free Zone. Why didn’t Maggie want him returning to the parked transport?

“Affirmative, Maggie. Query: Why do I need a new transport? I left one outside the Free Zone in Section 23.”

Maggie simply repeated part of her previous instructions, “Please proceed to the nearest exit and wait for transportation.”

He looked at his wristcomp. A green arrow was pointing towards Section 7 off to the west.

“Maggie. I think my wristcomp is malfunctioning. I’m being directed towards Section 7. Can you confirm?”

Section 7 was a hot zone. It still had high levels of chemical, biological, and radiological waste that could kill you in a matter of minutes.

“Maggie, that’s a hot zone.” I’ll be dead in minutes if I have to wait for a transport. Can you confirm a transport has already arrived along with a decontamination unit?”

Jace donned a hazmat suit he kept with him in the event of an emergency. The suit would give him a little more time but not much. That section of the city was so polluted it would burn the clothing right off of your body.

Jace’s communicator tickled his ear again and he heard Maggie say, “Transport is on its way. Please proceed to Section 7.”

He spotted a drone nearby. He couldn’t risk an override. Maggie would know it was him. Reluctantly, he started walking towards Section 7. He’d be there in about 5 minutes. He had to think fast.

Along the way he noticed it had started to snow. It must have been snowing for a while now because everything was covered in a thin layer of of the white powder. It was a fine snow and gave his surroundings an ethereal feel. Behind him he could see his footsteps slowly being erased.

Ahead, Jace saw the warning sign about the hot zone. His communicator tickled his ear again and Maggie’s voice returned.

“Please continue to the indicated pick up point.”

The arrow on his wristcomp pointed to a small structure with a single metal door. It was still in the Free Zone and technically not in Section 7. There was no lock, access pad, or any other way to unlock the door. Just a large handle.

He heard a loud click and then Maggie’s voice in his ear again, “Please open the door and enter the structure. You have 10 seconds to comply.”

Jace threw open the door and entered the small building and closed the door enveloping himself in darkness. The glow of his wristcomp revealed featureless walls and no apparent way to exit the cramped space.

Again he heard Maggie in his ear, “Please remove your wristcomp, hazmat suit, and communicator. You have 45 seconds to comply.”

“Wait! What’s going on? Why did you direct me here, Maggie?”

Maggie’s response was simple and unemotional, “Please remove your wristcomp, hazmat suit, and communicator. You have 30 seconds to comply.”

Jace tore off the suit, deactivated and removed his wristcomp, and pulled the communicator out of his ear.

Once he was done he yelled into the darkness, “Now what!?”

There was a blinding flash of light and Jace lost consciousness.

Jace awoke on a firm cot in a small room with a single glow-bulb hanging from the ceiling. After he cleared his head he looked around. No windows. No door. The walls were plain and unadorned. There was a small bottle of water and a ration pack on the floor near his cot. It appeared he was in a hollow cube.

Figuring he had nothing to lose (or gain) he opened the ration pack and ate its contents, washing it down with the water. It tasted horrible but the nutrients would keep him sated for days.

Sitting on the cot he centered himself. In his mind he ran through a simple mantra.

“I am Jace Greyson. I am loved by The Creator. He lives in me. I live in Him. In Him I live, and move, and have my being. I am one with Him and His Son.”

When he opened his eyes, a portion of the wall opposite him had turned transparent. On the other side stood a plainly-dressed, middle-aged woman with graying brown hair.

She smiled and said to him, “My name is Maggie. Welcome to Section 7.”