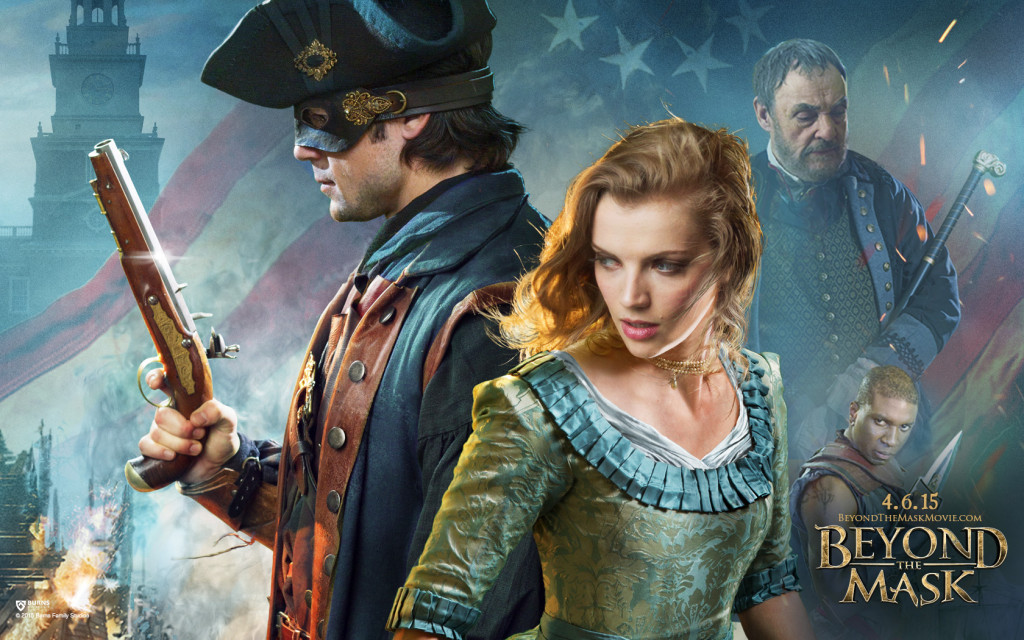 The phrase “for a Christian film” is also thrown around when referring to faith-based or family-friendly films. In some instances the use of this phrase is justified and in others it’s merely patronizing.

Beyond the Mask straddles the fence for me when it comes to movie reviews. It has elements in it from blockbusters films like National Treasure and Zorro while still appealing to an audience that wants their action a little less violent and their villains evil but not crude or profane.

Compared to recent faith-based films like Courageous, God’s Not Dead, and Do You Believe, Beyond the Mask stands head and shoulders above them in every aspect. I’m amazed that Sony’s Provident Films division did not seek to license this movie.

Beyond the Mask has set a new bar for Christian film-making. In my opinion it is better than many of the films that have been released through major studios aimed at Christian viewers. It’s a good movie. It’s a great movie for (wait for it…) “a Christian movie”. Let me explain.

It’s important to remember when reviewing a film that you have to consider the audience. Some themes, plot devices, or stories will not resonate with some audiences. The resources such as budgets, locations, actors, and more also tend to be limited as well. A good film is good in content, form, and context. You would not hold a student art film to the same criteria as a Hollywood summer blockbuster.

However, these films are outliers and when you compare the whole of Hollywood films against the truly outstanding ones, a lot of money has gone into making obviously horrible films.

Christian film-makers still should be held to a high standard but when you take into consideration the context of their art sometimes a little grace needs to be extended.

So, is Beyond the Mask a film worth seeing? Yes. Will everyone who sees it like it? No. Burns Family Studios has done a great job in creating this film. It goes places that Christians films haven’t come close to approaching yet.

I’ve seen the film twice. Once on my computer and another in the theater. Both times I came away impressed with what Burns Family Studios did with the resources available to them.

John Rhys-Davies performance as the villainous Charles Kemp raises the level of acting. I truly believe that when you have a talented actor like Rhys-Davies the other actors in the film benefit from observing his performance and mentorship. The phrase “a rising tide lifts all boats” certainly applies here.

The plot, while employing some tropes and cliches is solid. None of the devices used in the plot are ones we haven’t seen from Hollywood before and they’ll be used in future films too. There are very few screenwriters out there that don’t have a few crutches they lean on.

The costumes, sets, and special effects are what we’ve come to expect from most films produces by Hollywood. Aside from a few scenes, the digital effects didn’t detract from the film at all. The props, sets, and costumes look authentic to the period and helped to draw me in as a viewer.

Some Christians may find some the scenes where faith and redemption are discussed a little heavy-handed. For a film that targets a secular audience I’d be in favor of a more subtle approach to these topics but since the intended audience is Christian families I can understand why the film-makers took a more direct approach.

Beyond the Mask isn’t a perfect film. There are very few out there (if any) and I’ve seen others films in the theater that were worse and had much larger budgets to work with. When I take into consideration the content, form, and context of the film I’m comfortable giving it 3 out of a possible 5 stars.

Beyond the Mask is currently available on Amazon to purchase on DVD or stream on-demand. It will be available at Walmart nationwide on Sept. 11th, 2015.

You may also like: Looking Beyond the Mask with Director Chad Burns

Disclosure of Material Connection: Some of the links in the post above are “affiliate links.” This means if you click on the link and purchase the item, I will receive an affiliate commission. I am disclosing this in accordance with the Federal Trade Commission’s 16 CFR, Part 255: “Guides Concerning the Use of Endorsements and Testimonials in Advertising.”