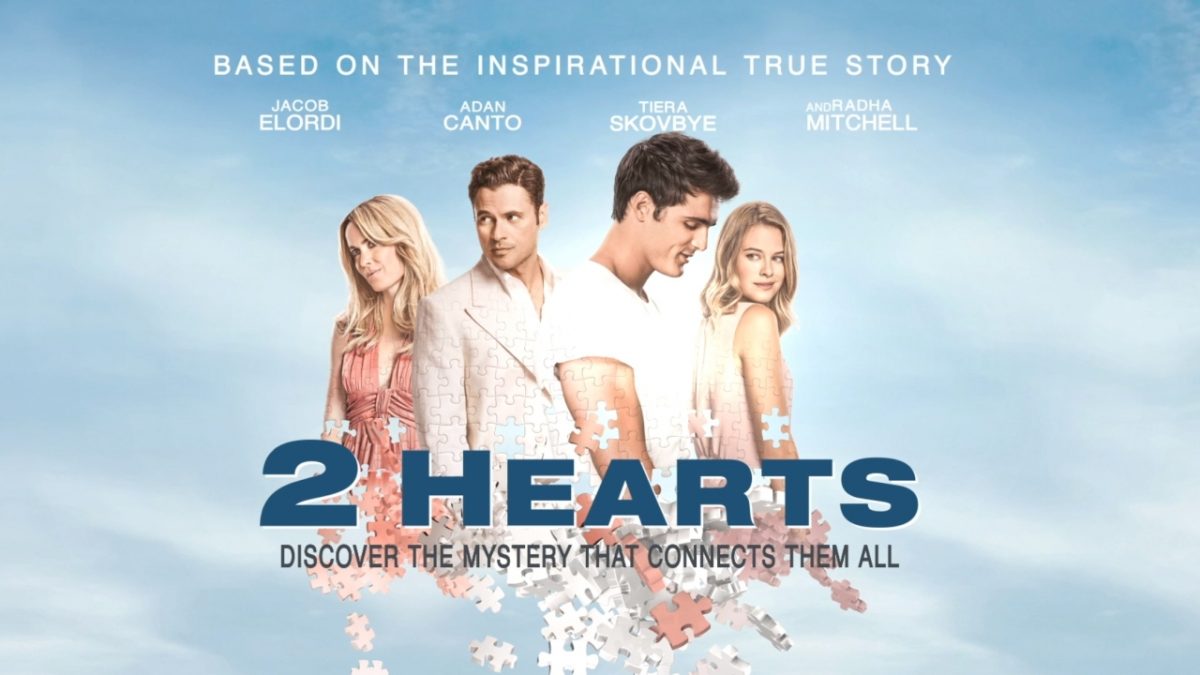 I sat down with my kids to watch 2 HEARTS a few months ago. Now that it is in theaters, I can share my review with you.

For this review, I’ll be presenting you with the good, the bad, and the meh. I’ll give a final determination at the end of the review.

For two couples the future unfolds in different decades and different places, but a hidden connection will bring them together in a way no one could have predicted. Based on an inspirational true story, 2 HEARTS is a romantic journey that celebrates life, love, and generosity of spirit, and will strengthen our belief that miracles still happen.

Good: There’s a plot twist! Who doesn’t like a good plot twist? It was unexpected (according to the girls, I saw it coming) and they appreciated the filmmaker’s creativity in how they managed to keep the plot twist hidden.

Bad: Near the beginning of the film there’s an f-bomb. This was really unexpected and it seems like it was put there just because the ratings board allows it. It seems very out of character.

Meh: There’s no explanation for Chris not having a license before going off to college. It’s used as a plot device in the film but given the time period this film takes place, it’s not really something that you’d ecpect.

Good: The narration helps you get to know the characters better. Given the nature of the film, it makes sense to have an unseen narrator.

Bad: There are awkwardly long panning shots that slow the pace of the film. In addition there are also a number extreme close-ups that didn’t feel right.

Meh: The family dynamic was a bit difficult to grasp at first. It took a little while to realize who was related to whom and where each of them was living.

Good: The portrayal of Hispanic culture was overall positive and reflected accurately. My oldest daughter who is studying in college really appreciated that.

Bad: The girls were a little thrown off by the fact that the story switched back and forth between the past and the present. It was a little tough in the beginning for me but I could eventually tell by the costumes and props “where” in the story we wer.

Meh: The romantic relationships were a bit unbelievable. The characters fall in love very quickly and it seems a little too fast. More time could have been spent on establishing their relationships.

If you’re looking for a date-night movie, consider 2 HEARTS. There aren’t a lot of new movies in theaters right now so this is an opportunity to spend a little time with someone you love.